Posted by Unknown Posted on 9:02 PM
Day 4 began in a whirl for me. I had a massage scheduled for 2 pm, we were scheduled to feed 2 missionaries, hubs was teaching a real estate class until 5 and was at least 1/2 hour away and missionaries were to eat from 5 - 6 and be on their way. I had steaks to cook out and I have no clue how to use the BBQ! I mean I can move it around the patio but turning on the gas tank and the actual igniting of the fire is beyond this chick's scope! Besides, like they always tell you: If you learn how to "do it" (whatever it is), then you "own it." Welllll, this gal ain't "owning" cooking out! I barely want to "own" cooking in! As my friend, Bertie, says the only reason I have a kitchen is it came with the house! I adore fast food resturants, ordering in and nice restaurants too. I've cooked for 47 years and hubs deserves to take this "hot grandma chick" out on his arm - "arm candy"!! Hah.......trust me, that ain't so and Sophia Loren has nothing to worry about! But I digress.

The missionaries ended up grilling the angus steaks I had and Love Bunny missed a fiiiiiiine meal, let me tell ya. Steak, potatoes, salad from our garden, corn on the cob and watermelon. Ooooh, let me correct that; he missed a fiiiiiiiiine HOT meal! Missionaries were gone before he even got home!

All this going on while Contractor Bob is measuring, cutting and hammering away. (Oh, an aside here.....some of you sweet little chickadees think hubs is doing the remodel; Love Bunny is NOT doing the construction; we hired a contractor we know personally. I wouldn't trust hubs to be diligent in getting it done in a timely manner, which in actuality means he won't listen to my nagging to "get this job done!" Remember, we're married - annnnd want to STAY married. Need I say more?!?!?!)

You've seen this house before so I won't add descriptions, just use your imagination as to what is happening to the living room/kitchen/dining area wall to enclose it and "define" the rooms a bit better. It's also providing wall space on which I'll hang more "fluff", move our grandfather clock into the LR and can then get a non-working fireplace/mantle in our family room. That'll be "eye candy" also. Squeeeeeeeallll!!!! 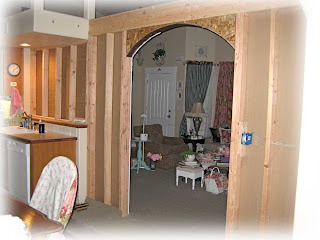 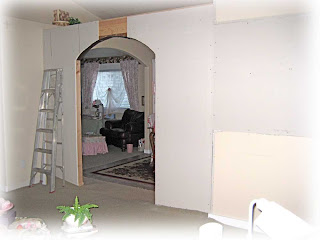 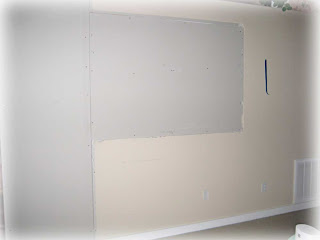 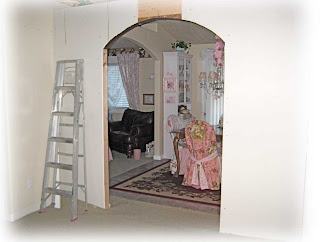 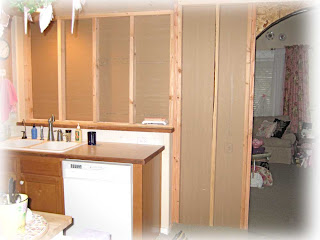 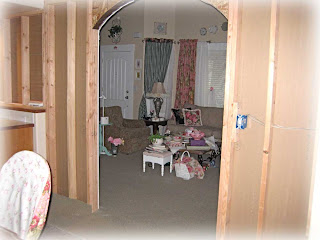 Earlier in the morning I decided to wash off the patio from the grease drippings and bird droppings. I moved all the chairs, pots, the grill and the infamous bicycle of hubs that he insists sits out there till he finds time to clear enough room in his shed to hang it in there. Well, 2012 is just too far away for me so I put it in the yard and when the sprinklers came on last night it got wet. I thought he was going to keel over. Now, don't those guys doing the Tour de France cycle in rain?!?! Yep, so what's the fuss all about?!?! It's wet; deal with it, guy! *Sigh*......................... 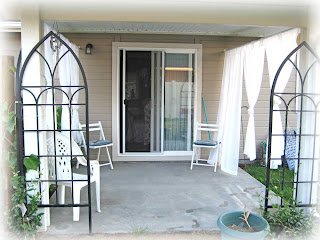 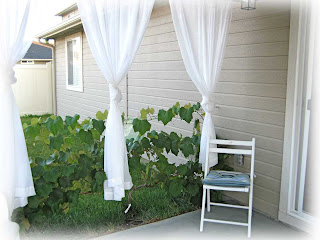 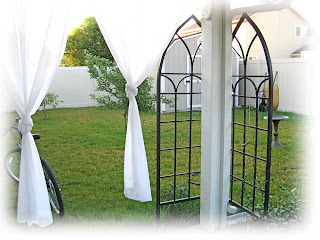 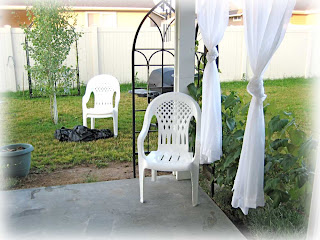 Then after hosing down and scrubbing the patio, I turned the hose on the window and surrounding areas of the house washing the spiders and earwigs outta their little hidey places. Whoooooooa, chicks, it was fearsome, let me tell ya!! Then I "attacked" the window, which in reality is a breeze because....................... of these 2 little items below. That's a window squeegee and a lambs wool window cleaner. Washing a window with these 2 little things is not only the fastest, easiest way to do it, it is actually fun. You dip the wool washer in plain water from the bucket, swish it over the whole window QUICKLY and then take the squeegee and wipe the water off. I've never had to do a window 2 times and they're clean with absolutely no film on them. It does it all efficiently and quickly. I absolutely love these 2 little items!! They're supposed to have been made in Italy but the handle says made in Oakland, Ca. and it's called Ettore, as you can see on one of the closeups, with a very specific little "aviator wings" logo. They're the absolutely, unequivocally best thing I think you'd ever find for cleaning windows - nothing but water and they're squeaky clean. A bit pricier than most but I've had these for maybe 8 years and it shows no signs of use or abuse. You can get them at commercial cleaning supply companies. Well worth it in the time it saves you. 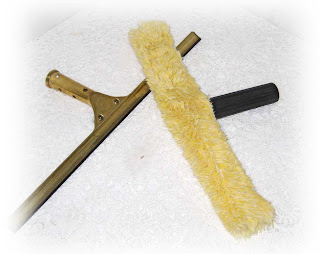 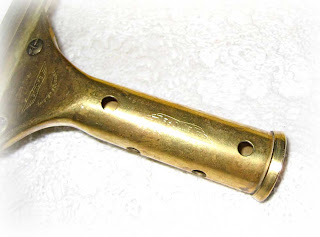 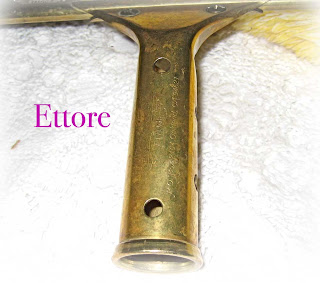