Home » » Camping Can Be Hazardous to Your Health!

Camping Can Be Hazardous to Your Health!

Posted by Unknown Posted on 11:01 PM
The only thing more boring to me than watching paint dry is looking at photos of other people. Yep, get ready for torture!!

Most people think of Idaho as lush, green, woodsy and mountain men roaming free. Well, while we do have that , the southern portion of Idaho is desert. Boise is known as the City of Trees because it has planted so many trees. When the settlers headed here they irrigated this desert and it is fruitful but it is still mostly desert in the southern part - all across the state mostly. It is lush and green in the northern part with beautiful lakes but it is becoming more populated. I think most Idahoans like to think of themselves as mostly independent and free to just live their lives as they would like without too much government interference. And they do. Idaho men and a lot of women are hunters. But if you ever come here and drift across the Snake River into Oregon you'll be very surprised. Oregon is desert also in the eastern part of it. What you see below is just exactly how it is 40 miles to the west of us here in Boise. Desert until you get across to the western part of Oregon. Surprises the heck out of a lot of people.

My hubs' sister and brother-in-law came for a visit several years ago from Pennsylvania and they could simply not believe the vastness of the west. Consider that while the eastern part of our United States has many states, there are not nearly as many here as back east. Our west coast has only 3 states: Washington, Oregon and Idaho. Land goes on as far as the eye can see. My brother-in-law asked hubs who all the land belonged to as he was astounded at how much land there was. Hubs said it belongs to you. It's BLM - Bureau of Land Management. That having been said, I invite you to get a little look of Idaho the next couple of posts.......along with the camp-out. ;-) And other things, of course..........don't wanna bore ya to tears, chicks!! ;-)

This is starting north of Boise heading up to Grandjean and Stanley. Stanley, Idaho has a population of about 69 people but it has some high profile movie types with gorgeous "little cabins" up there, as well as Sun Valley which isn't too far to the east of Stanley. 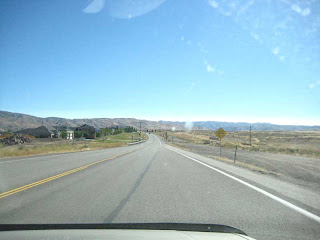 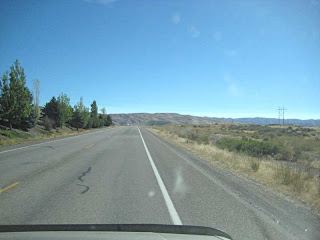 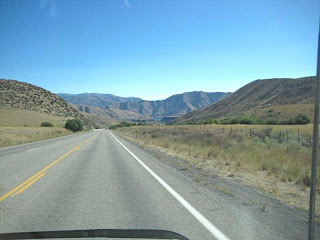 Nowwwww, we get to the fun part! Hubs putting camper up. Let me say here that you had better make sure you have plenty of band aids, neosporin and bug bite lotion. My only request to hubs was to pleeeeeease not make us the lead story on the six o'clock news that day or the next. We drove for about 3 hours to arrive at our destination with one stop at the Albertsons store to pick up a cold drink, some popcorn and wet wipes for hands (I'm certainly glad we did get the wet wipes too!) 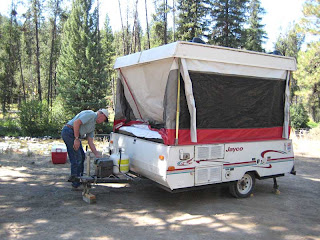 Our own "Private Idaho" just below our campsite on the South Fork of the Payette River. 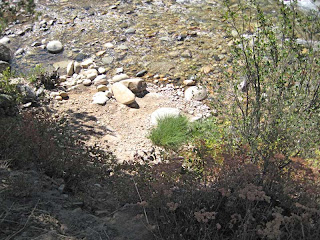 Looking down the river where it is low this time of year but lots of river rafters on this river. 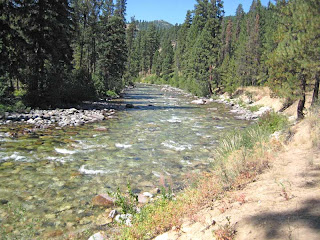 The next 4 pictures I'm standing in one spot the whole time just rotating the camera around our campsite. Note the trees for positioning of camera when snapping pix. The site is about 1.5 miles down a dirt road from the highway and is free. It comes with a ring of stones for a fire pit. That's it. We brought our own toilet, shower and water. We could go 4 or so more miles down the dirt road to a National Forest campground and get water and we do. But we like being alone on the river. There is also a hot springs on the river down near the paying campground. Why would anyone pay when you can get it free?!?!?! 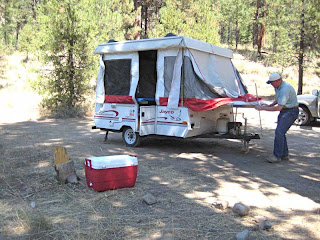 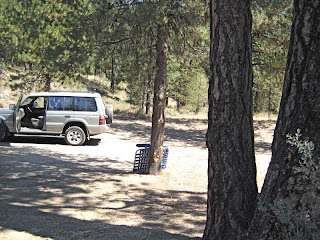 This is a Ponderosa Pine, which is indigenous to the western part of the U.S. They are really pretty and kind of remind me of the redwoods but they are not related, just have that kind of reddish bark. 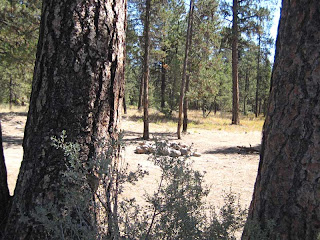 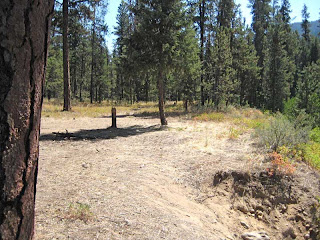 We use these 2 trees for a clothesline. 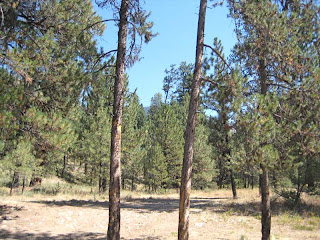 If you enlarge this pix, you can see our watermelon in the little dam we provided for cooling it. That water is COLD! 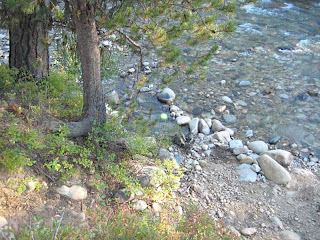 Sleeping part of the trailer. 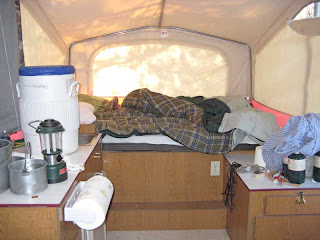 The ugliest fabric ever made! The ol' travel trailer stuff that was manufactured by the miles to go in trailers. I'm already negotiating for new roses fabric for the cushions and curtains, chicks! Have no fear. It'll be done by the spring when Love Bunny gets that "urge" to camp again! I am sooooo NOT into camping as I age. *Sigh*.............. 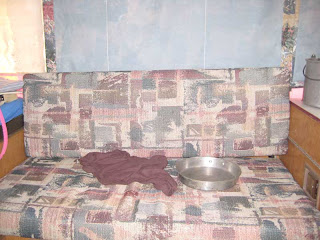 I think I should give the camper a name. Any ideas?!?! 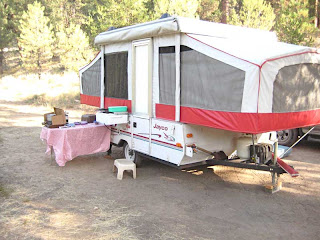 The picture of a contented man! He's so happy that he didn't amputate his fingers.....oooohhhhhhh, that's for tomorrow's post!! It wasn't pretty, let me tell ya, ladies! Hahhhhh...... :-) 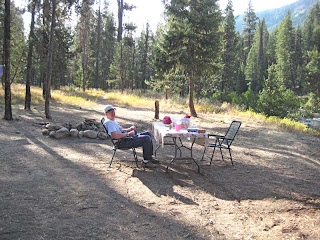