Posted by Unknown Posted on 11:01 PM
What happened yesterday:

Went to doctor at 9:30 am and nurse removed stint. 12-14" long with a curl in it to keep it in I suppose. She said if I had spasms to come back but the doctor wouldn't be in to administer morphine so I said if it happened (it did last time 3 yrs ago) I'd just go on over to the ER at hospital.

Love Bunny and I then stopped at the store for some applesauce that was on sale.

He took me home and went to work. I thought I'd buzz over to Boise and the Home Fabrics store to look for some fabric or panels for living room window. Boise is about 20 minutes from here.

In store I started to get "crampy" and at that point I figured I'd best just head on over to the ER at our local hospital.

Then the pain really kicked in. I don't know how I made it there. I was in such pain and shaking and sweating badly.

The ER was packed. I walked up to a nurse doing triage and told her I was passing a kidney stone (figured that would get their attention more than explaining about the spasm and it could have been a real possibility that I was passing one). She turned to a lady next to her who was a person registering incoming people. She got my name and birth date and said to come with her. I was hustled into the triage room and immediately taken to a room. I was still sweating, shaking and had started to get nauseous. They put in an IV for hydration and to get a vein started for pain killer. Then inserted an oxygen tube in my nose and cuffed my left arm. Then they asked me how bad the pain was on the "smiley/sad" face of pain. I said 8 or 9 and she replied that she was surprised it wasn't a 10 by looking at me. I was being on the side of caution when I said 8 or 9 because it really felt like a 10! First injection didn't stop it as well as I wanted so they gave me another injection through the IV and that did it. I was "snockered" then, chicks! But I started throwing up then. They administered an IV with nausea medication. After about 3 hours I called hubs because there was no way I could have driven at that point.

Of course, they wouldn't let me go until I gave them a "sample" of you-know-what so I did. They took the sample for lab work. Then the doctor came in and said I had a urinary tract infection. I was surprised actually since the doctor on monday gave me an antibiotic before the surgery. Hubs came and we left with prescriptions for antibiotics and nausea med and I staggered out to the car on hubs' arm. He put me to bed and went to pick up prescriptions.

I am still very nauseous and want to upchuck even at this moment. I had some applesauce and a little while ago some ice cream with strawberries. I'm having absolutely no pain at all right now. Just cannot keep my eyes open and want to throw up.

I think I'll hit the bed now, chicks. But I'll be fine tomorrow I'm sure.

I lost the strawberries and ice cream after about 5 minutes.

I think the applesauce stayed down however! LOL

I got the chance to clean out these closets during the Christmas week. I really have no idea why it took me so long, procrastination maybe? Probably? Definitely procrastination! But it's been naggin' on my mind for several months now. I knew it was truly a shambles when I tried to get some silky polyester type sheers in there and they kept sliding off onto the floor and also I couldn't find any light bulbs in a certain wattage that I needed so this is what happened. Tada!!!!!! Bliss.......Organization..........Order........ And then I had room to put the string of lights that hubs had put in with the Christmas decorations and just happened to find when he brought all the Christmas stuff down from the garage attic. I'd been looking for these little strings of lights and thought they were up there but he refused to go up until he was ready. Uuuuhhhhh, HIS time frame is NOT MY time frame. Hah!

So being home does have its advantages because otherwise I'd be dead before it ever got done. This I KNOW!

Now, as for the towels. This is just about 1/2 of what I have. Nuuuuu, less than half of what I have. I have no clue what I'm going to do with all these towels but if there's ever a shortage on bath towels, I'm set, chicks! I have some hung in the guest bathroom, some folded in a hanging towel holder in the guest room, some hanging in our master bathroom and more folded in our closet in our walk in closet. This is AFTER I've supplied my granddaughter with several sets when she moved into her new house. WHY???? Got me! Think I need counseling? Hmmmm. Well, since they are different colors I guess I'll just switch them around and wait till they wear out. A girl can never have to much ________. Fill in the blank! 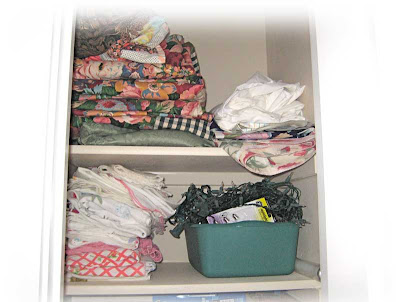 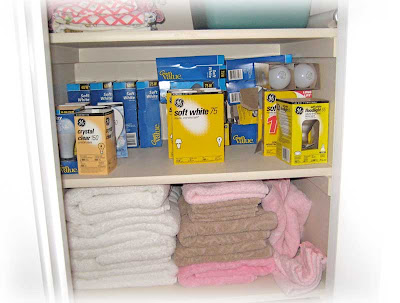 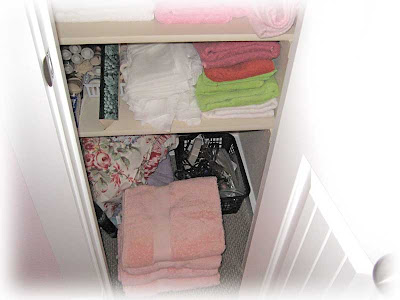