Posted by Unknown Posted on 11:01 PM
The last several days I've been "reflecting" on a lot of things.

Hubs wanted roast beef for dinner tonight. Now, there isn't much at all that man asks for and I have the power to make him happy with a roast so it's a done deal. He said to just put it on and he'd do the potatoes and veggies when he got home but I felt so much better today that I put some instant mashed potatoes and corn on the table for him and he was in heaven.

My philosophy has changed over the years from trying to "do it all" as the culture of the 60s, 70s and 80s told women we should do. I don't want to be the "leader" in this house. I am in a way though. I hope I bring a feeling of joy and peace to those who enter. I don't want a man who lets people walk all over him. I want a real man who'll fight for his family and be the example to his kids and wife. I'm equal in this household and it shows, just as hubs is equal. We complement each other. That's what I want - a real man! So if a roast can make him happy then he'll get a roast beef! It isn't about trying to wear the pants in the family, at least, for me it isn't. It's about working as a team to have a happy and serene home for us and family.
~*~

I was reading a humorous mystery lately and saw something that struck me. The heroine was a bounty hunter and trying to bluff her way into an office to spy on the occupants. She put on a name tag that got her in the door and to the guard. She said something that I have always thought but she said it so much better than I could.

Men trust women. She had on a name tag that said she was a surveillance expert and he believed it. She could look like a $5 "woman of the evening" and he'd believe it because that's what men do - trust women.

Women are wary. (And I can attest to that! Years ago hubs answered the door at night to a woman who wanted to use our phone. I said she couldn't come in but I'd phone for her. She ran down the walk and disappeared! I was shaken to think he'd believe a story she was giving him. Thank goodness I was there listening when he answered the door.) Men grow up thinking they're immortal. (I can attest to that also.......son in motorcycle accident at 16 years of age....hmmmmm! Long story. Not getting into it here.) So it's a good thing for men that we're women and it's a good thing for women there are men!
~*~

A friend in my ebay group wanted to see this picture by Michel Delacroix and it is one of my very favorites. When I saw it in a shop in California 20 years ago I knew I had to have it as it spoke to my heart. I'll never part with this picture. It just looks like a place I'd love to live. Oh, not for the big house but for the "simpleness" of the times it reflects. I don't want to live without my modern conveniences and anyone who says they do is either lying or nuts. Do you have any idea what that would entail? For one thing you wouldn't have a car to drive kids around to their games or go to the malls or whip up a quick meal in the microwave or even have toilet paper. Nuuuuuuu, not on my list of things to give up.

But I'd like for the "softness" of the times to return and grip us by the heart and make us kinder and gentler to each other, speaking no words of harshness or ill will and trusting each other more. 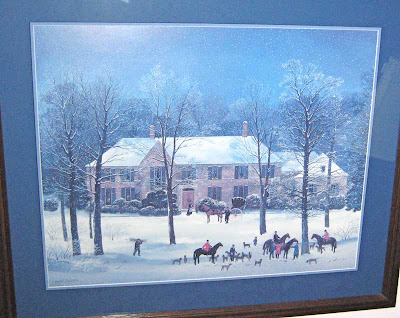 Seeing new babies always gives me a thrill and the man who painted my house has a new baby - their first girl. He sent me a picture from his camera phone and it reminded me of Anne Geddes style of photos. Isn't this a little doll? I can't wait to see her in person before all the "new" wears off but passing these kidney stones has prevented me from seeing her. I'll be able to soon though. 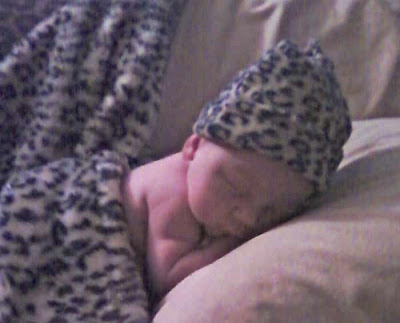 This is me and my daughter when I was pregnant with my son. She's such a cutie in this pix but I look like a pregnant elephant. 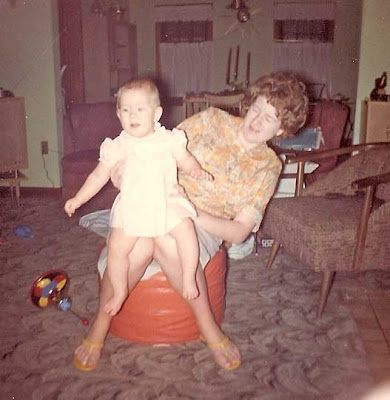 This is another favorite picture of her on the floor probably thinking of ways to drive her mother nuts! Notice the early 60s television. All we had then was black and white. But, oh my gosh, we felt we had it all with a tv and new tables for our military quarters. 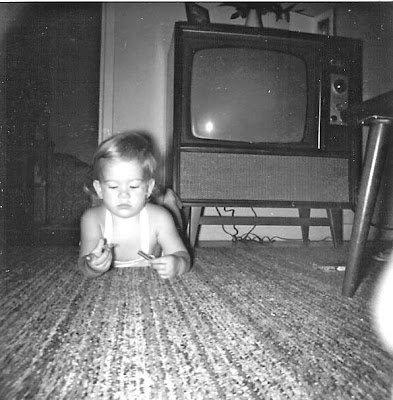 Now this is my favorite picture of my son. We lived near Balboa Park in San Diego and he was under 2 but his cheeks were so roly poly and that angelic look just makes my heart melt. He's a skinny 6'2" now. 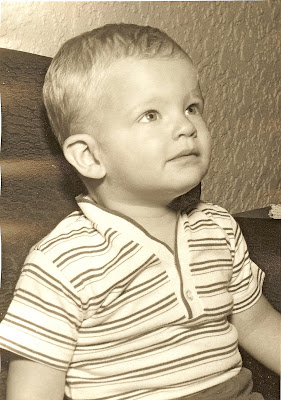 You'll notice the military issue sofa and those 2 charming little ones on it. Hah. They were scheming, let me tell ya. 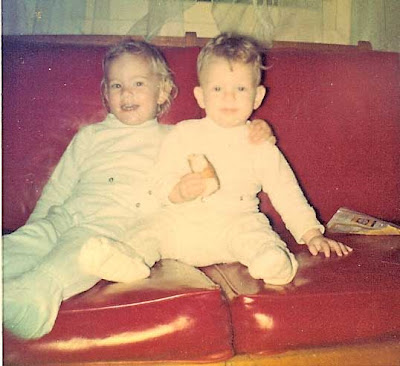 This is Miss Emma, Dolly's grandchild. When I first saw Emma a couple of years ago I noticed her sweet little cherubic face and those chubby cheeks. It reminded me of my son. I asked Dolly if I could use that picture and she sent me a newer one. (Isn't that just like an adoring grandma?!?!) But I've tracked Emma all through her years and thought how adorable she was. Dolly posts on her regularly and how she's growing into a little beauty. This picture is 2008. 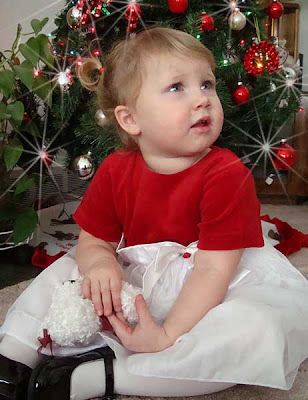 Just look at those trusting eyes. Children are so adorable! But I've enjoyed watching Miss Emma grow up also. 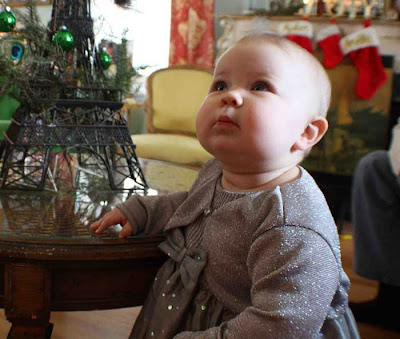