My Grandma and Grandpa

Posted by Unknown Posted on 11:01 PM
My cousin in W.V. is the genealogist in this family. Actually, she's my cousin's daughter but I never knew my cousin and have more of a connection with Vicki than her mother. But I'm very grateful and appreciative of the genealogy work she has and is so diligently working on.

She has it back to the 11th century I believe. She's found that one of our ancestors is William Wallace of Braveheart fame, but I've never seen the movie so I really don't know much about him. But recently we've had a few more "spirit of Elijah" happenings in this family.

My brother is getting the genealogy bug and his son has been doing quite a bit of it. My brother has sent me some back to the 15th century. But that's not what I'm going to talk about today.

We all have special memories of grandparents and I'm no different. But the "spirit" has been so close for several weeks now that I want to introduce you to my grandmother.

Since my father's mother died when he was 2 from the flu epidemic in the early 20s I never knew her but I've certainly felt her spirit. The grandmother I did know is Ruth and is my mother's mother.

The picture below is her and her father - my great grandfather. I don't remember if I ever met him though. I got my bosom from that side of the family! Grandma took me on train trips since my grandfather worked for the railroad as a conductor. She also told me I was her favorite granddaughter and I truly doubted that and supposed that she said it to all her granddaughters until just recently when my brother told me that she told him also that I was, indeed, her favorite granddaughter. None of my cousins will read this so I feel safe is stating that here. ;-) 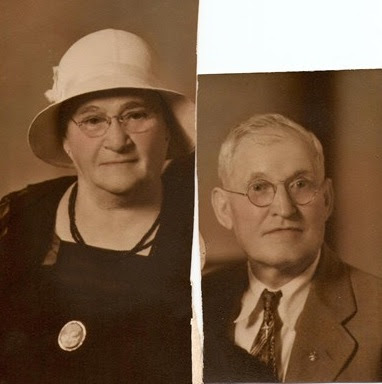 That is her second from left and her husband, my grandfather, in the middle. He was tall and regal bearing and never put anyone before his kids or grandkids. Last biscuit on the table was mine if I wanted it. Kind and generous man. 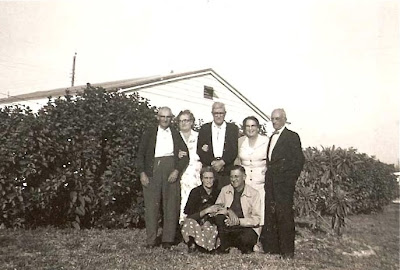 This is my grandma 2nd from left and her sisters and a brother I think. I don't remember him so not sure. 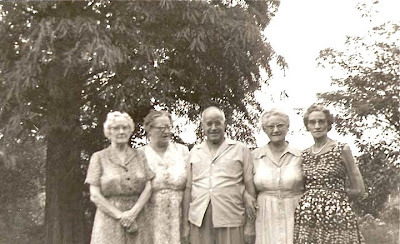 My grandpa, Walter. Isn't he handsome? I think so. 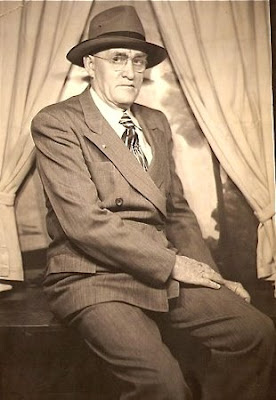 We think this is them - grandma and grandpa on the left. Looks like him, but my grandma looks kinda coquettish and I've never seen her look like that. This had to be in the 1890s. 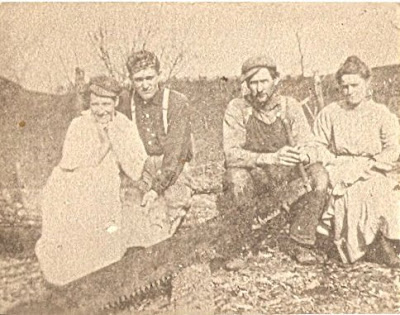 But this is where I remember staying with them once when we visited. They built this home in Ohio near Huntington, W.V. and it was in a peach orchard. My mother was so embarrassed to tell anyone they lived in a peach orchard! They loved it and the house was truly a lovely one for the early 50s. I never could figure out why it embarrassed my mother to say they built in an orchard.

That is my brother and little sister in the picture below. Maybe I was taking the picture, don't remember. But my grandpa would pluck a peach off a tree and cut it into little sections for us with his pocket knife. (Remember the days when just about every little boy or man had a pocket knife? Not anymore though.) But the juice would run down our lips and chins and we'd just love it.

Then that road off to the left side was a dirt road and we'd walk down there and think we were in a secret place. We really had good times in that home. 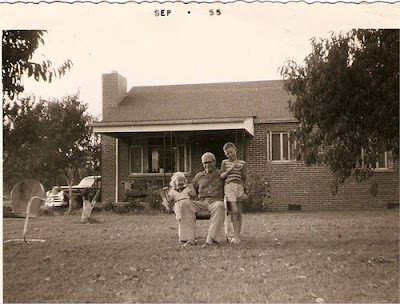 This is a family reunion in 1894 from my grandma's side of the family. Looks like a bunch of horse thieves to me but I doubt it. Just the way they dressed back then. But that's my "family" there. Hard to imagine I'll see them one day, huh? 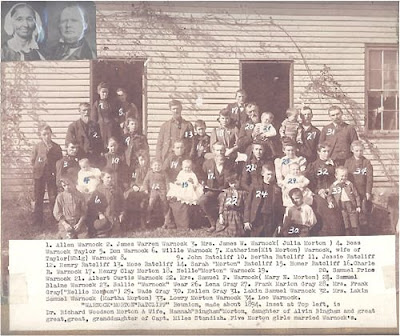 And these are my grandparents pretty near the end of their lives. My grandma had diabetes in the latter part of her life and had to have her legs amputated. This is a picture of them in the hospital just before grandpa's passing away. My aunt told me many years ago that just before he died my grandmother was near him and he told her "Ruth, you're the most gorgeous woman I've ever seen." There's no doubt in my mind whatsoever that's a true story because it's so like him. My only wish is that hubs sees me that way with his eyes also when it gets near the ending of our mortal lives. 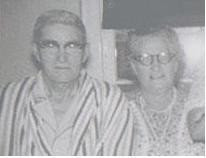