Posted by Unknown Posted on 11:01 PM
Hubby made this screen for me some weeks ago and since I have a "faux mantle/fireplace" I needed a faux fireplace screen, but I just now found time to decorate it. He keeps taking me to California, Seattle, the wilds of Idaho to camp (more on that soon!) and letting the relatives visit so I've been so tired and busy taking care of those things I've been neglecting the house. 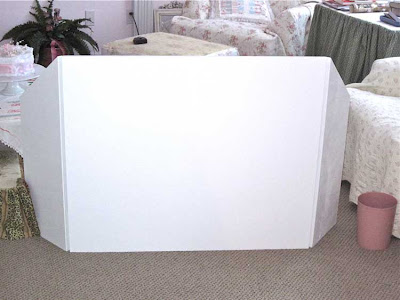 So I ordered some decals on ebay, waited a week for them to arrive and put them on after our return from Seattle. Neither one of us like the decals on the faux fireplace screen so I took them off. I thought they'd be bigger than they actually were and they simply didn't work well on it. I think you'll agree it looks like a shotgun sprayed it. 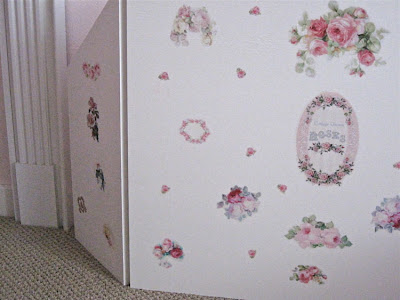 Since I do much better with fabric I decided to cover it with some shabby roses barkcloth and any other pretty fabric that I had enough of without having to purchase more. (Hubby's kinda weird about all the fabric I have.) I left 2 small decals on the sides but the front I covered with fabric that I wet with liquid starch and "glued" it on with that so it can be taken off easily when I tire of it. (This has been known to happen frequently.) :-) I added some netting to the top and it looks much better than in the photo but I'm going take it off. I don't like it on there much. The fabric and roses and lace can really stand on its own merit. But I thought I'd show you what it looked like at first. 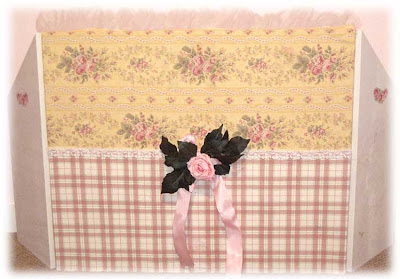 And this is how it finally looks. The picture above was taken at night and these two were taken in full daylight so I wanted to capture them accurately. 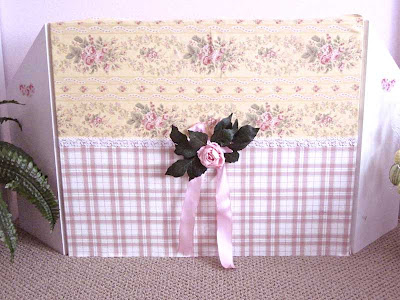 I like the final look of it. As is always the case, it looks much prettier in person. 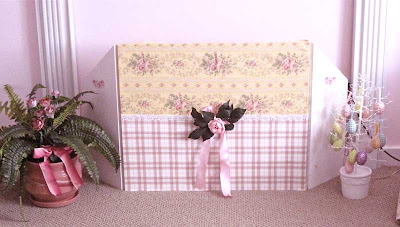 On our trip to Washington state we saw a bunch of cows lying in pastures—all of them. I asked Love Bunny why they were all lying down and he said they must have been "party hardy animals" who were too pooped to pop. He's such a kidder.
~*~