Posted by Unknown Posted on 11:01 PM
Recently I had to bring this exercise machine into my office to make sure I'd use it every day— which, btw, isn't happening every day, but I thought I'd at least try and am succeeding much better than I though. Anyway, nothing in here isn't froufrou-ed up at least if I can possibly do it. So I threw a shabby chic sheet over it and added some pillows because I really bonked my head on it 2 weeks ago and I can still feel the soreness where th' head met th' metal! 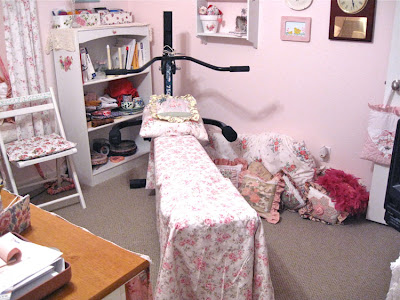 I think it looks just fine! So why does it remind me of a morgue slab, hummmm? Long and narrow? At least the sheet is roses covered. 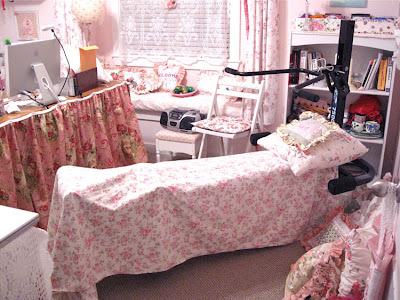 Remember this little table from this post here when I bought this little vintage desk. Well, I recently had a man strip it, cut the legs down 2 inches but he also fixed the drawer and made a new handle similar to the old one but bigger. When hubs went over to pick it up the man apologized for some gouges that just wouldn't smooth out and suggested I might want to fill them in with wood putty before I refinished it. Nuuuuu, it's supposed to be a shabby chic romantic chippy vintage desk!!! What don't men get about that concept?! I kept telling hubs forget even telling me that because it's perfect just as it is. I love all the little gouges and chips in it. They still don't get it! I give up. *Sigh*...... 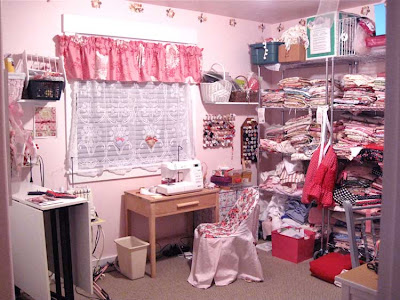 I love it though and put the other desk in the dining area to hold the phone and stuff. I may leave this as it is for a while until I decide what I want to do with it. Truly though, I think I'll just give it a whitewash of paint and decal it with roses. 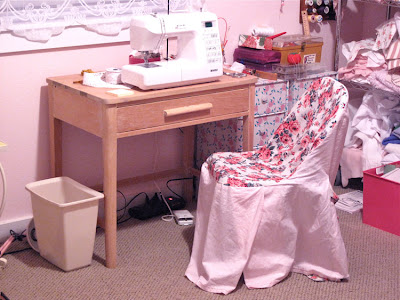 This desk is holding the old sewing machine so I can make ruffles without changing things for a while. I'm not getting rid of it, but I'll have to find some place else to put it because this just won't do. It's on my painting and craft desk! Ya think hubs would go for a room add-on??? I can hear the screaming now, chicks. *Sigh*........ 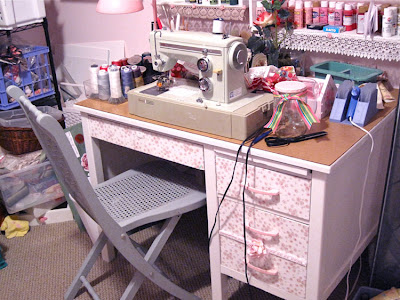 Pretty sad at the moment, but I'll think of something. 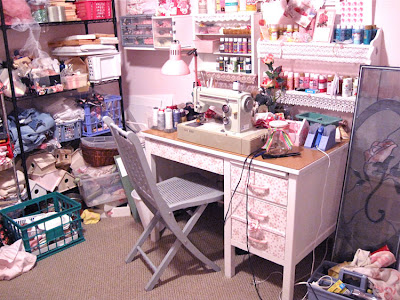 I was in Joanns a couple of weeks ago waiting in the checkout line and a cell phone rang rather loudly and, may I say, with a rather obnoxious ring tone. She, of course, answered it and started speaking loudly enough that half of Idaho could hear her and the only reason the other half couldn't is because of the mountains! The checkout only had one person running it and there were 3 ahead of me and one lady was returning several items so we got to hear the "phone woman" talk about her life. Now, I don't know about you but there isn't much I hate to hear more than another person's life while waiting in line to check out. I loathe loud speaking and life histories of obnoxious people. She looked rather low class but that's beside the point; manners matter most to me and she was exceeding my limit of bad manners that day. I couldn't care any less if she was going to take so-and-so to Hawaii for his birthday, how many comps she had for a Las Vegas hotel or what she was going to do! Totally uncalled for. You just wonder how dull their pathetic little lives must be to have to announce to the shoppers of Joanns what she is going to be doing. Please, please don't be obnoxious to the point of rabid customers wanting to toss you through the plate glass window and crush that cell phone into the side of her head. It's rude, obnoxious and unmindful of those of us standing there wishing aliens would come down and beam you up! *Sigh*........ And for those of you wondering: Nuuuuuu, I DO NOT answer my cell phone in public. I let it go to voice mail or step outside (very, very infrequently, just in an emergency if I answer at all) to conduct personal business.
~*~