Posted by Unknown Posted on 9:42 AM 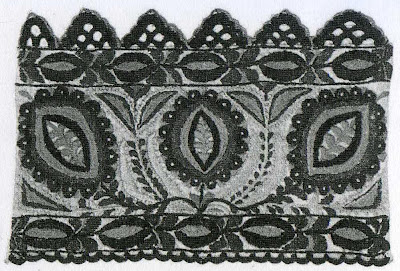 Illustration: Egerland embroidered cuff
Bohemia is the westernmost region of the modern Czech Republic and for centuries was part of the multi-ethnic and sprawling Austro-Hungarian Empire. Bohemia itself was, to a certain extent, an example of at least a bi-ethnic community with both Czech and German towns and communities within its regional borders.  The embroidery within this article is generally Bohemian in context, but to be more specific it concerns what was generally known as Egerland embroidery. Egerland, surrounding the town of Eger, modern day Cheb, was in the extreme western area of Bohemia and was until as recently as the end of the Second World War, largely populated by those of German descent. 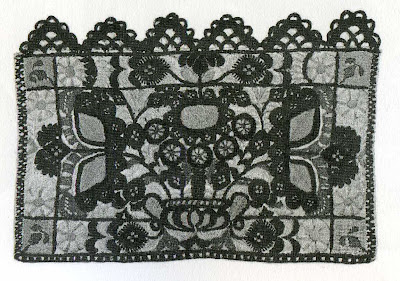 Illustration: Egerland embroidered cuff
In this respect it is probably wise to differentiate, at least partially, between German and Slav embroidery in the region. All the examples of embroidery shown here are of Ederland and therefore German origin. The rest of Bohemia tended to follow the larger Slavic tradition of national costume with large areas of embroidery work. However, Ederland embroidery was much more localised, and became more so the closer we get to the twentieth century where modern clothing replaced much of the traditional national costumes of the area. Embroidery became limited to much smaller areas of decoration, particularly around the cuffs of shirts and blouses.
Traditional Egerland colours for embroidery work tended to contain large amounts of blue and yellow, rather than the predominant red of Slavic embroidery. Whether the colour variation was used to differentiate regions and ethnic divisions is unclear, although the Egerland population's natural and consistent sympathy towards German culture, whether that be Austria itself or neighbouring Bavaria, rather than with the Slavic Czechs in the rest of Bohemia, may have something to do with the consistency of colour. 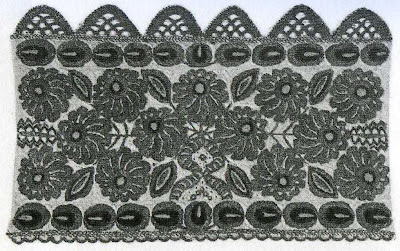 Illustration: Egerland embroidered cuff
What is interesting about the design work shown here is how closely at least some of the examples are to the decorative work produced at the turn of the twentieth century, particularly by those designers associated with the Wiener Werkstatte. This groundbreaking and popular decorative movement, which was founded in 1903 and was to dominate the decorative arts of Vienna for at least a decade or more, was dominated in its turn by what at the time was considered traditional peasant art. The regional diversity of the Austro-Hungarian Empire proved a particularly rich resource for the designers of the Werkstatte.
Bohemia was connected directly to the Wiener Werkstatte on a number of levels. At least a dozen of the large contingent, who worked for the Werkstatte over its lifetime, were born within Bohemia or Moravia, including Josef Hoffmann himself. Factories and workshops within the region also supplied products with the distinctive Wiener Werkstatte look, particularly in glass of which Bohemia was and still is famous. 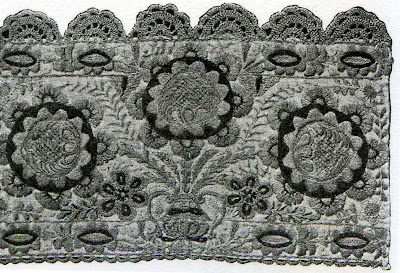 Illustration: Egerland embroidered cuff
Although no sweeping statements can be made about designers with Bohemian or Moravian backgrounds swamping the Werkstatte with ethnically derived decoration, it is within the realms of possibility to say that at least some of the background and initial ideas of an artist or designer can originate from childhood memories and neighbourhoods. Josef Hoffmann himself has gone on record as admitting that his Moravian background influenced at least some of his Werkstatte decorative work.
Whatever the reasoning behind any influence on the Werkstatte itself, the design work shown here is fresh, lively and unpretentious. There is little of any classically static engineering of the decoration, with work appearing to be both bold and spontaneous. This general style of embroidery work which could be found across Central and Eastern Europe provided an enormous inspirational vocabulary for a number of schools, organizations and movements of the late nineteenth and early twentieth centuries. It is certain that its influence, at least to some extent has been downplayed by the perceived influences of more exotic areas of the world outside of Europe. Perhaps this has more to do with European ethnic and regional decoration being judged as largley unaesthetic and broadly amateur in quality and nature. However, this makes it all the more important to recognise as an influence on the decorative arts of Europe. 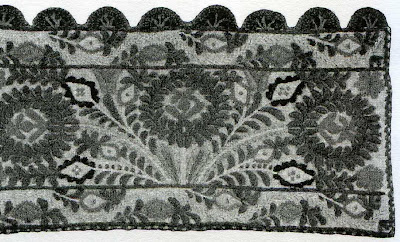 Illustration: Egerland embroidered cuff
Egerland Embroidery, like all other regions of European embroidery work, has a decorative list of parameters that makes it unique within the larger European framework. It is this regional uniqueness, all with separate vocabularies, that has allowed European embroidery to become such a rich, diverse and influential medium that has spread well beyond its own craft.
Reference links:
Peasant Art in Austria and Hungary

Viennese Design and the Wiener Werkstatte