Posted by Unknown Posted on 9:03 AM 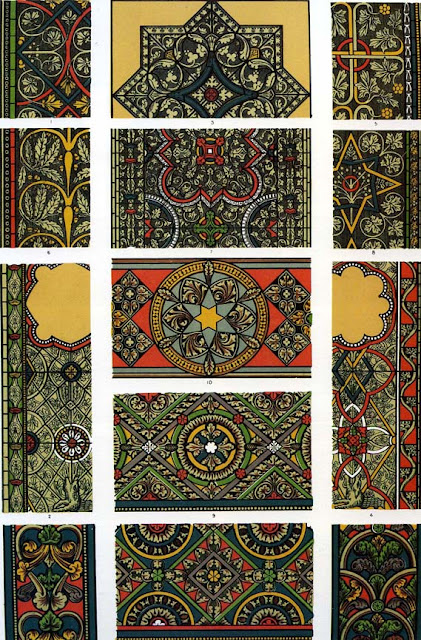 Illustration: Stained Glass from Owen Jones The Grammar of Ornament, 1856
In Britain stained glass design and production saw a massive rise in both popularity and function in the nineteenth century. It was used extensively in both the domestic and ecclesiastical markets and although artistically it can be said that the twentieth century may well have seen the apex of stained glass design work as far as creativity is concerned, it is still the nineteenth century that saw the craft appealing almost universally, probably for the first time since the medieval period.
Although Owen Jones does cover stained glass decorative work in his 1856 The Grammar of Ornament, it is very much tucked away within the larger Medieval Ornament chapter. However, there are twenty nine examples on two large colour plates covering the time period between the twelfth and fourteenth centuries.
As with many examples of ornament around the world and in a number of different time periods that Jones included within his seminal book, he was convinced that on average and with some exceptions, the earlier the period of decoration the more symptomatic it was to an ideal that later became subverted or diluted, ending in an eventual ghost impression of the original ideal. Although this to a certain extent is a simplification of Jones theories regarding the history of decoration, it is also to some extent again, an over simplification on Jones part of the history of the decorative arts. There are always a number of factors that go into the development of styles and eras of decoration. Trying to seek the early purest form of a decorative style and isolating that style from all other influences and cultural cross-pollinations is difficult at the best of times and often impossible. 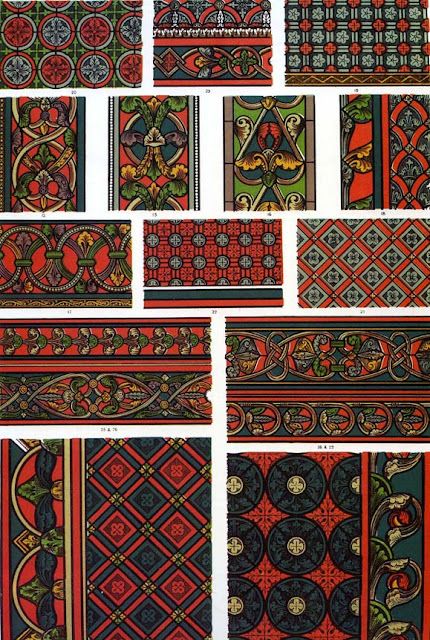 Illustration: Stained Glass from Owen Jones The Grammar of Ornament, 1856
This theory of early is best, was used by Jones for his all too brief description of medieval stained glass decoration. He closely associated the pattern and ornamental elements of early stained glass design with that of medieval illuminated manuscripts. In some respects this makes a great deal of sense as stained glass, along with painted wall decoration was often the only physical example of the ideals of a religion that was available to the general public. The Bible itself during this period was considered off limits to all but the chosen few and therefore interpretation was limited to the visual.
Jones believed that the more accomplished stained glass designers and craftsmen became, the more pretentious they eventually became, adding superfluous affectations and gimmicks within the work. Eventually this was to lead to the craft trying to imitate the world around it, rather than being content to interpret that world symbolically. As far as Jones was concerned, along with many of his contemporary nineteenth century critics, the attempt was always doomed to failure with the craft tradition and decorative arts always being the ones to suffer most.
Although perhaps Jones critical stand was more of an ideological one than that of one that considered the elements of practical application, there is still much to be said for the theory. There is little doubt that many craft disciplines, particularly those such as stained glass that were heavily defined by their own practicalities, have suffered by the imposition of decorative fashions and styling.  There are particular eras whereby designers either failed to understand the physical limitations of stained glass, or refused point blank to curtail their enthusiasm for decorative schemes in order to accommodate stained glass limits.
This attitude has inevitably led to stained glass work that can only be seen to be classed as such under the very loosest of definitions. It was perhaps no bad thing for Victorian stained glass designers to be gently attracted towards the earlier forms of the craft by such critics as Jones.
Reference links:
The Grammar of Ornament: All 100 Color Plates from the Folio Edition of the Great Victorian Sourcebook of Historic Design (Dover Pictorial Archive Series)

The Grammar of Ornament. Folio Edition

Grammar of Ornament: A Monumental Work of Art

Stained Glass and the Victorian Gothic Revival (Studies in Design)

Medieval and Renaissance Stained Glass in the Victoria and Albert Museum

English and French Medieval Stained Glass in the Collection of the Metropolitan Museum of Art, New York (Corpus Vitrearum)