Posted by Unknown Posted on 11:01 PM
It's April Fools Day! But I don't usually fool anyone.
*

I was wondering the other day how many of you bloggers actually read my sidebars. It's there you know for a reason. You can see what I like or dislike, what I looked like many years ago and what I look like now, a bit about my life before moving to Idaho, a few tips on blogging, etc., a place to go to see my laundry room, family room, my white and pink Christmas tree I decorated one year, to look at what I like to read, pillows I've made, lamps I've decorated, a tribute to our Marines, etc. In essence, do you get the flavor of me?

The two things I don't post about are politics and religion, at least anything that might be contentious. Oh, I may throw in a saying or two once in a while, but this is a serene home, and I wish to be kind and gracious to people who enter my home (my blog is an extension of my home). So you'll rarely, if ever, see any contention here. My hubby and I live a pretty quiet life. That is not to say we're not spirited people. Oooooh, noooo. We definitely are spirited! We fuss, struggle and push/jab each others buttons on a regular basis. But we love each unconditionally and wholly. We're committed to each other now and eternally. So now you know a little bit more about me. ;-)
*

Of course I fell in love with this antique door knob with key lock on a red door so I thought I'd share it with you.

A painter's drop cloth could be used as a chair cover and look just as lovely as this chair does, plus it would be much cheaper than anything else.

The light coming through the windows on this yellow curtain is what drew my attention.

Yep, my kind of bed. This is pretty but it makes me dizzy looking at the yellow dots.

Just think of the possibilities a swath of netting can lend to your decorating. I use it lavishly around my home—bedroom, dining room and office. And it is very cheap to use.

Is it time for a snack and some lemonade yet? Yes! Go get some and enjoy.

Another McKenzie-Childs type sofa. I love their style.

I normally use the shower but once in a while I want a tub soak. When I do, I take a book, my glasses, a scallop shaped back rest and read. I love soaking. I just wish I could find a holder that would go across our garden tub. It's quite large and wide and nothing has fit so far. I may have to get hubby to make something acceptable to me, not too heavy or cumbersome.

Another dream dining room of mine. I'll never have a sun room but if I did, I'd want it to be this gorgeous.

Isn't this back yard patio lovely?

Posted by Unknown Posted on 11:01 PM
Just to let you know that if you're seeing two different fonts on here today, so am I. No clue what is happening but I'll figure it out later. If it ain't one thing, it's another, as they say.
*
Welcome once again to Pink Saturday brought to you by Beverly's blog. Just click and go to her blog to see all the pink participants.

Back in the 1960s we lived in Oceanside, California. We were newlyweds and quite poor. It would be a magnificent day if I received a letter from my mom with two dollars—that would be about fifteen dollars in today's money—in it. But I truly look back on those days with fond memories. Another blogger evoked those memories on her blog not too long ago. I hadn't thought of those days for many years. And that brings to mind a story.

We first lived in a trailer, which was on blocks in a very neat and orderly "neighborhood" of trailers on the USMC Military Base of Camp Pendleton. It was one bedroom, if you could call it a bedroom and actually quite nice. It was small—about the size of a small camper— but immaculately clean. When I had our first child we then moved up to a two bedroom trailer and felt like we were in heaven with all the extra room. After our son was born, we moved into base housing—called Sterling Homes— in the town of Oceanside. We had a 2 bedroom, first floor apartment. It was furnished as we had nothing but a crib, clothing and dishes. We had two children, only one car and were fortunate when it ran. I have no pity at all for people who complain they have only one car. My hubby drove the car to work; I did the shopping with two kids in a stroller and walked about a mile to the local Vons grocery store. But if I was real lucky I could take a bus or hubby would drive and shop with me sometimes after he got off work. I said "No pity" and I meant it. Try doing that today.

In those days there was a truck that came around; actually, there were two trucks that came around as I just this moment remembered the second one. The first was a bakery truck from a LA-based bakery called Helms Bakery. This is a photo of that coach, as they were called. I loved that truck. As I recall, you could just step up into the coach and get your items and put them in a paper bag. It also sold cigarettes and at that time hubs smoked; however, I've never smoked and am glad of that now. (He hasn't smoked for 30 years now and I'm glad.) But they sold all the items on that coach on credit. You just signed a receipt, no credit cards in those days as I recall, and paid when payday came around. It saved us from starvation many times. Not only bread was sold, but pastries, my favorite sweet.

The second truck was a big ole lumbering truck with fresh vegetables, fruits, candy and other things that actually eludes my mind now. It had fold-up sides and he even carried a hanging scale to weigh the produce. And it also took just a signature to buy something and pay it off on our paydays. The man who owned that business was Mexican and he had a service that few people had in those days, but he was valued in our neighborhood, let me tell you. That truck also kept us from starving a few times. Okay, so we weren't truly going to starve, but it sounded good in the telling of this story. We've been incredibly blessed in this life. Always enough food and always enough money to survive. That's a great blessing
*

This is a very brave color to use and I love it. That living room is about the size of mine. Small. Actually, mine is probably smaller than this room.

Can you really believe a polka dot Aga stove?!

Isn't this lovely in blue? Just a sweet setting. Organized perfectly in my opinion.

When I saw this pink door I started thinking about painting my front door pink. It's red now and I am wanting to repaint it a vibrant red, but I just may opt for pink instead. We'll see.

I'm not fond of carnivals or amusement parks but this merry-go-round is stupendous.

I like pink and white stripes but I can't even begin to imagine the amount of thought and measuring that went into this bathroom wall decor.

Definitely my kind of setting.

Can you imagine these colors in a cottage by the seashore?

I have a hook that is very similar to this piece of jewelry.

I'd never thought of painting my hutch pink but this one inspires me! I think I'll do it this summer.

Weathered doors are always great eye candy. Just a certain patina to them that draws us.

My embroidery thread never came on tiny palettes so beautiful.

While some people may like this look, I think I want a more polished look in my bathroom furnishings.

Another stroke of genius in the color department. Gorgeous!

Highfield Taking Shape for the Spring Parade of Homes!

Posted by Unknown Posted on 1:08 PM
The Highfield is taking shape! This masterpiece will be featured in the Kalamazoo Parade of Homes June 8-16, so mark your calendars and don't miss the opportunity to take your own private tour of this lakeside retreat! Until then, we can all swoon over these progress photos that give a glimpse of what the final product will be like... 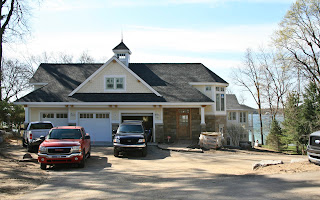 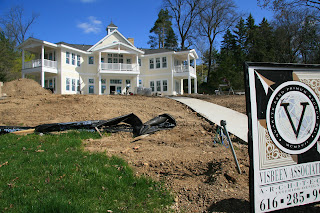 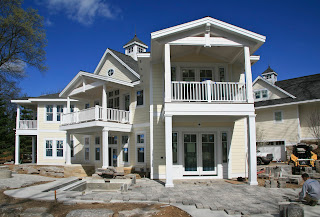 Beautiful landscape and hardscape surrounding the waterfront side of this home 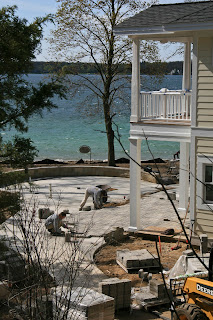 Hard at work on the hardscape - but not a bad view during the work day, right? 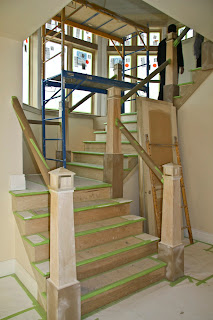 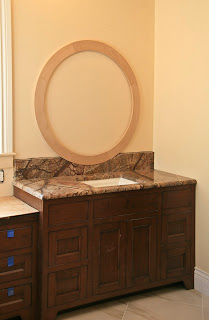 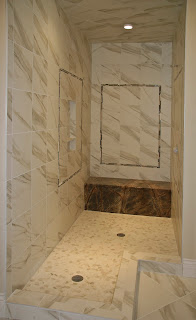 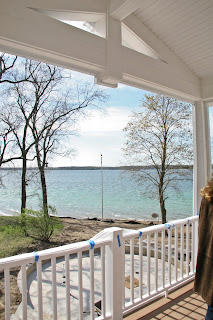 View from the balcony of the master bedroom - yes, please! 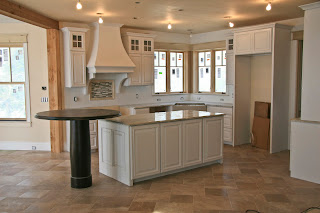 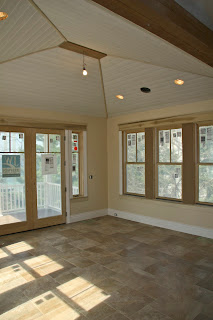 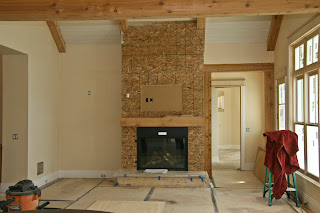 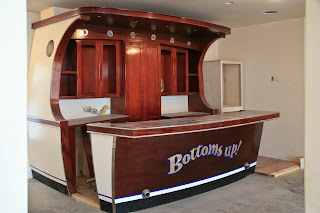 One of the greatest features of this home - the boat bar!  Bottom's Up! 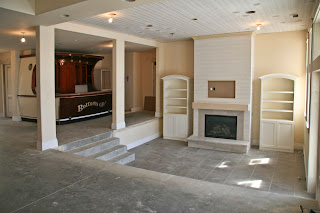