Posted by Unknown Posted on 7:48 AM
Cornerstone University is rounding third with the new baseball stadium we designed, according to a recent article published on MLive.com.  Construction is progressing nicely and the stadium should be completed in August.  Here are a few aerial photos taken last week of the construction, as well as MLive's article from last month that includes our watercolor rendering of the project. 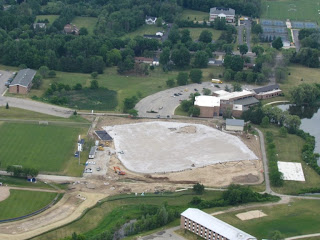 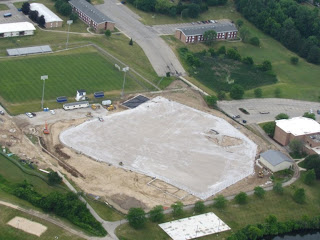 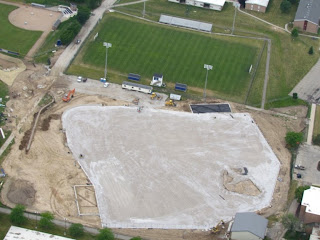 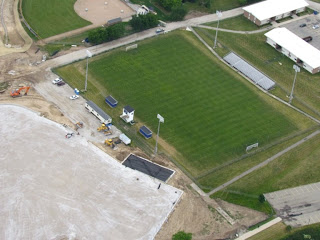 EnlargeEmily Zoladz | ezoladz@mlive.comCornerstone University baseball coach Dave Mitroff stands in the area that will eventually be home plate at the construction site for Cornerstone's new baseball facility on Monday. The new stadium will be attached to new dorms. Crews are aiming to complete the field by the end of the summer. (Emily Zoladz | Mlive.com)Cornerstone Universtiy breaks ground on new baseball field gallery (8 photos)
GRAND RAPIDS, MI. – Cornerstone’s Dave Mitroff longs to see his baseball team swing a bat, but until then, he’ll watch construction workers wield shovels instead.
Cornerstone has a baseball program but doesn’t have a team – just yet. Mitroff has players recruited, but he doesn’t have a stadium or a season – just yet.
But the Golden Eagles are rounding third and headed for home.
“This has been an incredible time,” Mitroff said.
Cornerstone announced in September it would revive the sport, last played in 1996, thanks to a $1.5 million donation from Jack and Mary DeWitt of Request Foods in Holland. A groundbreaking ceremony on a new stadium was held Nov. 2. It’s expected to be completed in August. The first game is tentatively set for Oct. 13, a Saturday, against Judson University in a fall game before the season starts in February.
Mitroff, who has more than 800 games of coaching experience, was hired last October. Since, he has been busy throughout the season, even without playing a game.
“Probably about 90 percent of our time has been spent on recruiting,” said Mitroff, 52, who, with assistants Ron Engels and Chuck Lowitzki, has signed 30 players with verbal commitments from five others. The goal is to have 40 players with 15 on a junior varsity team, he said. Photo courtesy of CornerstoneAn artist rendering of Cornerstone University's future baseball stadium.
“We started behind the eight ball because we got a late start after a lot of early guys had committed before October,” said Mitroff, who had been the assistant varsity baseball coach at Prairie Ridge High School in Crystal Lake, Ill. “So we’ve literally been all over the country, networking and trying to establish a connection with a lot of Christian schools, a lot of scouts and college coaches and let them know what Cornerstone is all about.”
The team will be diverse, Mitroff said. The Golden Eagles have recruits from New Jersey, Florida and British Columbia, along with five from Cornerstone who survived a tryout. Mitroff will also have his son, also named Dave, who will transfer from Olivet Nazarene University in Bourbonnais, Ill. and play his last season with Cornerstone.
“It’s just a unique opportunity to play for my dad,” said the young Mitroff, a 22-year-old catcher who will convert to pitcher. “I can save money at the same time, so it just made sense.”
As the first season nears, Mitroff hopes to avoid the pitfalls of other first-year programs, such as Lourdes University, from Sylvania, Ohio. The fellow WHAC member won just one conference game and went 8-45 overall this season.
“Pitching and defense wins championships, so you have to be strong up the middle,” Mitroff said. “And I’m pretty certain we have some guys who can swing it. But like any coach, I’m concerned about pitching.”
When Mitroff isn’t on the recruiting trail, he is on campus where construction began earlier this month on the new stadium.
“I’ll be out there every day giving them doughnuts and coffee,” he said.
The stadium, located in the middle of the campus and adjacent to the soccer field, will have seating for about 500, with an outfield berm where another 1,000 can watch.
The dimensions are 325 feet along the left and right field lines and 400 feet to center.
It will also have lights, a clubhouse, batting cages and be covered by a Field Turf synthetic surface.
But most interesting, the stadium will be connected to two dormitories, to be built next year. Rooms will overlook the stadium – with shatterproof windows and strategic netting.
“I’ve been around and talked to lot of people, and no one has seen anything like it,” said Dave Grube, Cornerstone’s athletic director. “It will be unique to Cornerstone and certainly very beneficial to us as well as summer camps.”
Mitroff has kept tabs on the competition in the WHAC this season, and watched a number of games while waiting for next season to begin.
“Oh, yeah, I’ve been following,” he said. “Not having a team, I’ve been around the country but I’ve also had a chance to watch, and I was at the conference tournament.”
The Golden Eagles’ first official game is Feb. 15 in Memphis, Tenn. against Victory University. The first home game will be March 15 against Taylor University.
“I really feel honored to be in this position we’re in,” Mitroff said. “We have great support. We’re going to get there. But it’s been killing me to just watch all this baseball.”
Labels: baseball stadium, cornerstone university, mlive.com, visbeen associates
Newer Post Older Post Home