Posted by Unknown Posted on 11:43 AM
The Olympic Games have been a catalyst for some of the most memorable stadium designs in history, full of innovation and visual interest, each one trying to top the last.  The London 2012 Olympic Games begin tomorrow and will kick off with opening ceremonies in the Olympic Stadium that the designers at Populous Architects hope will be a legacy.  Will it have the same impact as some of the other stadiums designed in the past?  Here is a look at some notable Olympic-size architecture of the Games...

London 2012
Planning for the Olympic Stadium in Stratford, London began over a decade ago and is meant to be the centerpiece of the city's third time hosting this event (1904, 1948 & 2012).  The stadium will be able to seat up to 80,000 people throughout the Games and has the revolutionary design to be able to convert to a 60,000 seat sporting arena once the Olympics are done.  The exterior is wrapped in colored canvas banners that create 300 entranceways into the stadium, with the colors acting as navigation tools in addition to contributing to the building's overall aesthetic. This stadium takes the cake for being one of the most expensive buildings in the world, with costs coming in at roughly $753 million.

Beijing 2008
Also known as the Bird's Nest, Beijing's National Stadium was the site of the 2008 summer Olympics.  The design, done by architects Jacques Herzog & Pierre de Meuron led by chief architect Li Xinggang, was inspired by Chinese ceramics.  The nest effect was designed at first to hide steel supports for the retractable roof, which was later removed from the design.  The top is now covered by a semi-transparent air bubble film which is waterproof, but allows for sunshine to penetrate into the stadium.  It covers an area of 99 square miles and can accommodate up to 91,000 people (80,000 permanent and 11,000 temporary seats). 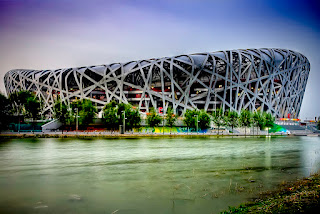 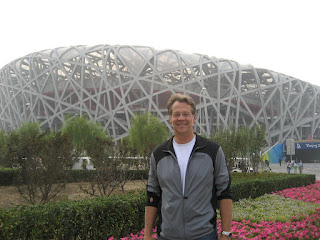 Wayne in front of the "Bird's Nest" during his trip to China in 2008 to design Star Coast Villas
Sources:
http://www.travelchinaguide.com/attraction/beijing/national-stadium.htm

Munich 1972
Designed by German architect Günther Behnisch and engineer Frei Otto, the Olympiastadion of Munich, Germany was considered to be revolutionary.  For the first time, canopies of acrylic glass connected by steel cables were used on a large scale, with the shapes meant to imitate the Alps and the transparency meant to represent the new democratic Germany.  The official motto became "The Happy Games." 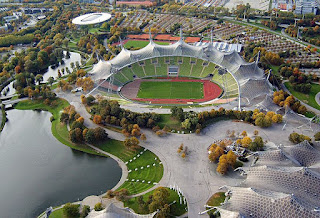 Sydney 2000
Stadium Australia, also designed by Populous (London Stadium designers) was the site of the 2000 Summer Olympics and is the largest Olympic venue ever built, holding up to 110,000 spectators at the time of the Games, later reduced to 83,000.  The cost of this venue came in at $690 million.  The building itself was designed to reconfigure from an oval to a rectangular shape in 12 hours, making it the only stadium in the world that can host five professional sporting events - rugby league, rugby union, Australian rules, football and cricket. 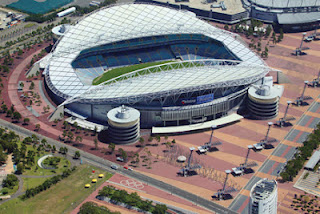 Berlin 1936
The Olympiastadion in Berlin was built on the site where the Deutsches Stadion once stood, the venue intended to host the 1916 Summer Olympics, which were cancelled due to World War I.  In 1931, the Olympic Committee selected Berlin as the location for the 1936 Summer Games, but when the Nazi regime came to power in 1933, they decided to use the Olympic Games for propaganda.  Hitler ordered the construction of a new sports complex to host the events and titled the Olympiastadion complex Reichssportfeld.  It was designed by Werner March, son of the architect of the original Deutsches Stadion, with modifications made by Albert Speer, Hitler's head architect.  The lower half of the structure is buried 12 meters underground and had a capacity of nearly 110,000, including a special stand for Hitler and his associates.  It was one of the few buildings that survived World War II nearly untouched, only damaged by machine gun shots.
Image Source: http://en.wikipedia.org/wiki/File:Bundesarchiv_Bild_183-R82532,_Berlin,_Olympia-Stadion_(Luftaufnahme).jpg
Sources:
http://en.wikipedia.org/wiki/Olympic_Stadium_(Berlin)