Posted by Unknown Posted on 9:42 AM
Our firm recently participated in 54Jeff, an ideas competition for public use of the former Grand Rapids Public Museum building at 54 Jefferson.

In 1940, after years of storing and exhibiting its collection of borrowed or repurposed spaces, the Grand Rapids Public Museum moved into 54 Jefferson, a 30,000 square foot facility, one of the last projects to be funded under the W.P.A. during the Great Depression.  Over the next fifty years, 54 Jefferson, with a whale skeleton suspended in its great hall, and mammal dioramas and displays of rocks and minerals, taxidermied birds and other natural history specimens in the adjoining galleries, was visited by nearly every schoolchild in Grand Rapids.  In 1994, faced with the deteriorating condition of the building and changing museum standards, the museum relocated to a new facility, leaving dioramas, showcases and exhibits behind.  Since that time, 54 Jefferson has been maintained by the museum and the city of Grand Rapids, but has otherwise been largely closed to the public. Beginning in 2010, the Grand Rapids Public Museum collaborated with SiTE:LAB, a non-profit that conducts art exhibitions in vacant buildings, on a series of projects in 54 Jefferson.  Allowing the public - and particularly those who still remember the space from grade school field trips - to again enter the space has fostered renewed interest in the future of this iconic building.  SiTE:LAB is hoping to use that attention to initiate a community driven reexamination of the building's potential as a public space, and as a first step in that process, conducted this ideas competition, called 54Jeff.

Competitors were challenged to create compelling visions for the future of this former museum.  While not every proposal may be feasible in light of the political, legal and financial obstacles facing the development of any new urban public space, each can raise the community's awareness of the unique potential of 54 Jefferson to serve Grand Rapids in new and innovative ways. 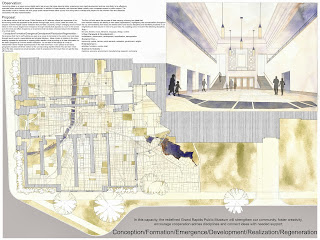 Proposal:  In the same manner that the former Public Museum at 54 Jefferson offered an experience of our surrounding world that appealed to the senses through sight, touch, sound, taste and smell, we propose a Grand Rapids cultural institution that provides a dynamic, living & changing record of local ideas in their various stages from emergence through maturity that appeals as much to the senses as to the mind and offers its patrons an experience that has been enhanced beyond the limitations of a virtual realm.
Conception/Formation/Emergence/Development/Realization/Regeneration:  We propose that the 54 Jeff building be used as a venue to introduce to the public new local ideas through launch events, presentations and physical displays.  Ideas remain on display in the many existing vignettes for exposure to ongoing public reaction while providing up to date information on the idea’s progress as it moves toward realization.  At the heart of this design is a map of metropolitan Grand Rapids superimposed on the main level floor.  A “pin” placed at an idea’s geographic location will direct visitors to the corresponding vignette where they can learn more about the idea, experience actual samples, track its progress and find ways they can to get the idea off the ground.  The floor will also serve the purpose of idea mapping; showing how ideas that have reached maturity are leading to new ideas (regeneration), highlighting idea concentrations throughout the city, demonstrating how ideas are related both in and across disciplines and identifying locations in our neighborhoods that may be in need of a good idea. As a starting point, we submit the following disciplines:
In this capacity, the redefined Grand Rapids Public Museum will strengthen our community, foster creativity, encourage cooperation across disciplines and connect ideas with needed support.
END RESULT
34 entries from all over the country and beyond were created with compelling visions for the future of this former museum.  Although our firm's entry did not win, we believe it was a notable idea for this building as public space.
To see the winners and other entries, please visit 54Jeff's website or facebook page.