Home » » The Remodel Is Starting!

The Remodel Is Starting!

Posted by Unknown Posted on 6:50 AM
The contractor will be over this afternoon to start the remodel. We had him give us the estimate several weeks ago and since then he has taken a job with the state because of insurance so this is going to be a part time project for him. It's not a big project but we've given him our time frame (Hah, as if that makes any difference to contractors! In Calif. we had a second story put on our home there and it was supposed to be a 3 month project. It took 5 months!!!! Hubs was sitting on the toilet one day and the men started coming up from the crawl space while he was .........well, you know. A traumatic experience to say the least!) Anyway, he has to be done before Hubs has to go to Orlando middle of august. Nuuuuuuuu, I ain't goin', chicks, I don't DO airplanes, remember?!?!?! I know, I know, I'm missing this great opportunity to go see Disney World, but I've seen Disneyland! So why would I want to go to a humid place in the middle of summer to see little mice running around mischievously?? Nuuuuuuu, ain't happenin', chicks!

Anyway, I'm seriously digressing here. First off, these are 2 little shelves I got for 99¢, yessssssss, ya heard that correctly, 99¢!! Squeeeeeeallll!!! One was already white but had some black felt pen marks on it so I repainted it and painted the other bigger one and voilà here they are - good as new! I'm so thrilled!! Can'tcha tell, my little doves?!?!?! I'm feelin' like the Spritzing Queen with my little spray can of paint! This is sooooooo easy to do - take cap off of paint can, point to object to be painted and press top tab! I'm loving it! No clean up except maybe for the index finger. 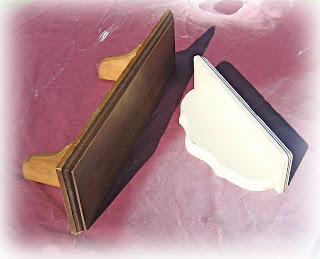 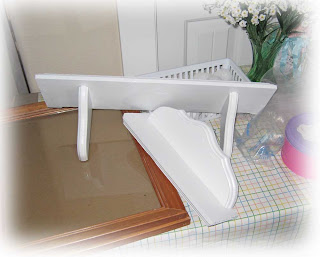 Here is the wall getting the remodel. (Read carefully; you will be given a pop quiz at some point!) I hate pass throughs from living room to kitchen and do NOT like people seeing in my kitchen from a living room. (Yes, we might have been able to get it done when being built but it was beyond that "easy/quick" point, would have taken much more time and we HAD to be out of other house very, very quickly. Thus we knew that someday we'd redo it.) On the photos you see where it says 12" out from existing wall. Well, we've decided it is to go out 30" on each side leaving an archway of about 5 ft. We will then have a little more "defined" living room, no view of my dirty dishes and squeeeeeealing with deeeeeeelight........more WALL space!! I'm so happy I could walk barefoot over pink nails!! THIS means I can move our lovely grandfather clock to that wall along with "other" things getting it out of my family room and put a new fireplace........squeeeeeeeeeeeal again...........in there!!! Get my drift here? More fabulous shabby, chic, frou frou looking stuff in family room!!!

But the downside is we're living like pack rats for a couple of weeks. Unorganized is not one of my favorite states to be in! But I promise "progress" photos daily if you want to travel along this "remodel" with me, my little blogging buddies. 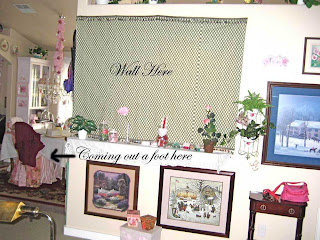 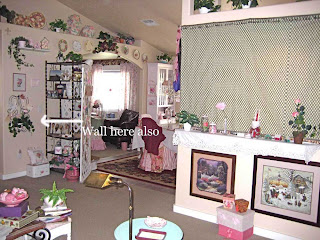 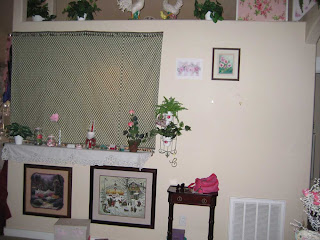